Fabrics today come in all kinds of different textures and colors. But, some colors are more popular for certain fabrics. Take velvet, for example. Velvet fabric used to be reserved for royalty and was only found in a few exclusive colors. So what color is velvet? And is the term still used to describe the color, or is it now used to describe a texture? Let’s find out together.

The original color of velvet was a reddish-purple color. That’s why red is still one of the most popular colors for velvet fabric. But today, velvet fabric can be purchased in a lot of different colors. This is because the term velvet is now used to describe a specific fabric texture.

Why was velvet associated with certain colors in the past? And how did it evolve from a few colors into the versatile fabric that we know it today? Lastly, how can you find that perfect fabric color to use for your project? 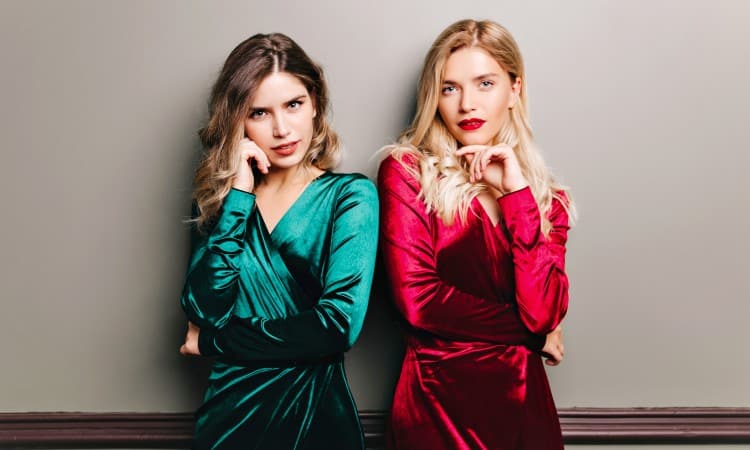 Is Velvet a Color or Fabric?

At this point, you may be thinking, “Wait, velvet was once a color? I always thought it was a type of fabric.” But the truth is that velvet has always been a type of fabric. However, the fabric used to only come in limited colors, particularly red. That’s why red velvet is so popular.

Some fabrics have been around for a very long time, even before the Middle Ages. Velvet is one such fabric that was originally made from silk. However, what hasn’t been around for a long time are the many different types of dye that can be used to color fabric.

People in ancient times used to have to make dye out of what they had available: usually fruits, vegetables, plants, minerals, and even insects. They were limited to the colors that they could make, which were usually just basic colors.

So even though velvet fabric has been around for a long time, it hasn’t always been available in a wide range of colors. That’s why the fabric has been associated with certain colors, such as red. Red velvet is an iconic fabric often depicted in fashion and upholstery in artwork, especially art from the Middle Ages.

What Color is Velvet?

I’ve already mentioned that red is the traditional and most popular color for velvet, but blue was also used and other jewel-toned colors such as green. The reason that red and blue are popular for velvet is that they are associated with royalty.

Remember that velvet was originally made from silk, and even during the Middle Ages, silk was a rare and expensive fabric. Velvet fabric was also complex to make without the equipment that we have today.

Considering all of these factors, velvet fabric was expensive. Only the wealthy could afford it, which is why royalty and nobility were the primary wearers of velvet fabric. The fabric could also be woven into different patterns. The color or pattern on velvet fabric was sometimes used to symbolize a specific family. That’s why some noble families may have preferred to wear blue velvet over red.

Due to advancements in how we can make textiles and dyes in different colors, velvet is available in a lot more colors besides just red and blue. But even today, a lot of the colors used for velvet fabric are jewel tones.

Velvet fabric can come in different shades of red, blue, green, and even yellow and purple. And, due to the texture and sheen of velvet fabric, the color can look different at certain angles as a result of how light is reflected from that particular angle. 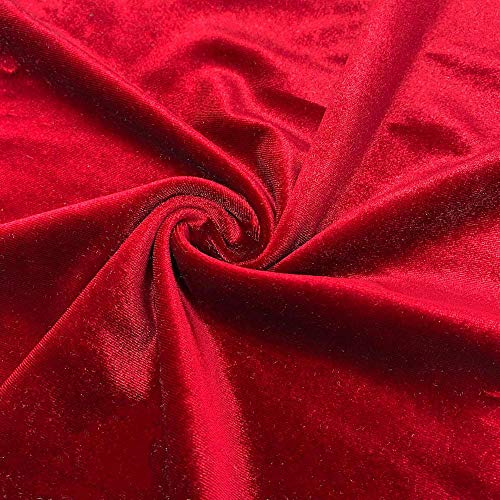 Red was the original color of velvet, but velvet is not always red, nor does it have to be red. In original versions of red velvet fabric, the shade of red was more of a deep red instead of a bright red. This is because of the natural dyes that are used.

Sometimes the shade of red can be more of a magenta color, especially when used to make paint colors. Today, red velvet fabric comes in different shades of red, including jewel tones such as ruby or darker shades such as crimson.

Is Velvet a Shade of Blue? 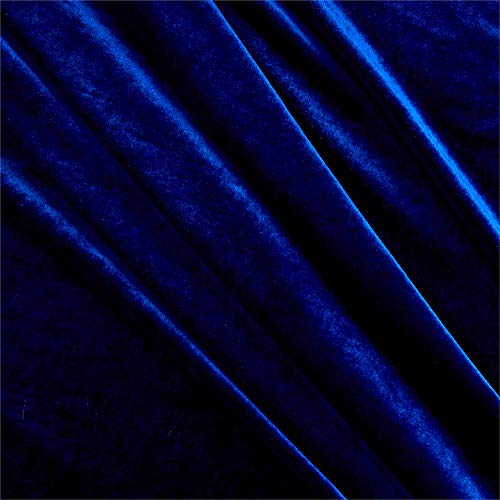 Blue was another one of the original colors of velvet, although it wasn’t as popular or widely used as red was. With that being said, there are some shades of blue that are considered velvet blue. Since velvet was associated with jewel tones, traditional blue velvet was darker in color, similar to the color of sapphires. It may also be described as royal blue.

Like red velvet, blue velvet fabric can come in many shades of blue today. It can be dark blue, light blue, or any shade in between. The colors are still jewel tones, but blue velvet is more than just the color of sapphires. There is also aqua blue and blue velvet that is more muted in color, but darker shades of blue are still the most common.

What is Black Velvet Color? 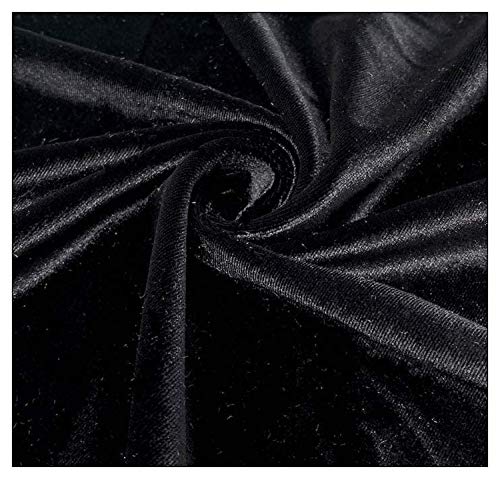 Black velvet fabric started becoming more popular in the 15th century and is still a common velvet color today. In the past, black velvet was just a shade of dark blue mixed with purple before black dye started to be created.

But today, black velvet fabric is black. Black dye is made up of a mixture of red, blue, and yellow pigments. But the amount of each pigment might vary for each brand or type of black dye. There may be slight differences in the color of the black velvet fabric.

The fibers used to make most fabrics start as white. The fibers are dyed and then woven together, or woven together and then dyed. All colors come from the three primary colors, which are red, blue, and yellow. The colors are mixed in certain amounts to create dye, which is used to color the fabric.

Is Velvet a Texture? 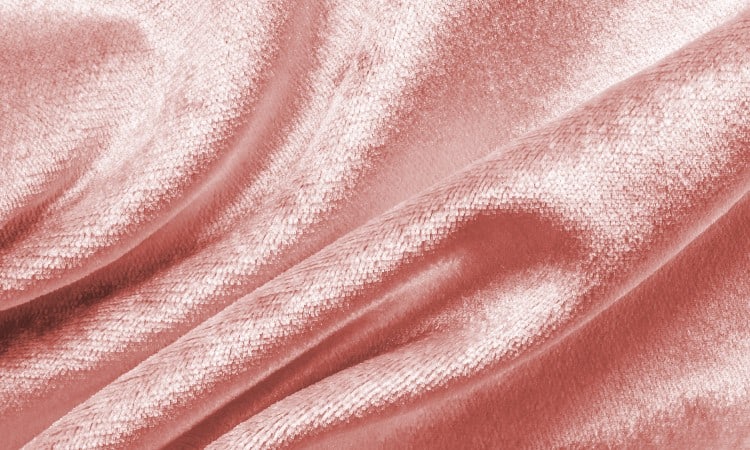 When there were only certain colors that velvet fabric came in, you could use the term velvet to describe the fabric’s color. But today, velvet is the term used to describe a fabric’s texture rather than its color.

Velvet describes a fabric made of silk, a silk/rayon blend, or polyester. But 100% silk velvet is still rare today (and more expensive). Velvet texture can be described as having a short but even pile height and a smooth nap.

There are different varieties of velvet as well that have different appearances and textures. Some of the most common include:

Velvet fabric is still used for upholstery and curtains, but velvet clothing always makes a reappearance around the holidays.

Although velvet fabrics come in many different colors, there are still some that are preferred above others. Finding the perfect fabric color for your project is essential for seeing your ideas truly come to life. But if you’re new to sewing or just need a little help finding the perfect color, you may need some background information first.

Hex color codes are a six-digit series of numbers based on the value of red, green, and blue expressed in a particular color. The first two digits represent red, the second two represent green, and the last two represent blue. Hex codes are an easier way to express color rather than using the RGB format.

For website design and computer applications, color codes are universal. But it’s important to note that for fashion and interior design (such as paint and dye colors), color codes are not universal because it depends on how a particular company mixes its colors.

In the following chart, all color codes are from CrispEdge. CrispEdge contains a database of colors that you can search for by color name or hex or RGB code to find more details about that particular color.

But the actual color of a fabric may be slightly different than what the color code expresses since they aren’t universal. However, you can still use the codes to find fabrics that are a close match.

Velvet could be used to describe a color in the past, but now it is used to describe a fabric that has a specific texture. The fabric does come in traditional, jewel-toned colors, but it comes in other colors as well. Red, blue, and black are still common velvet colors. If you enjoyed this article, share it with others and leave a comment. Thanks for reading!