Used for satellites and science equipment, Vantablack hasn’t yet hit the clothing market. A forest of carbon nanotubes makes up vantablack. It withstands shocks and vibrations and is perfect for rough rides. But, human touch can cause damage. Due to this, vantablack isn’t usable in clothing. 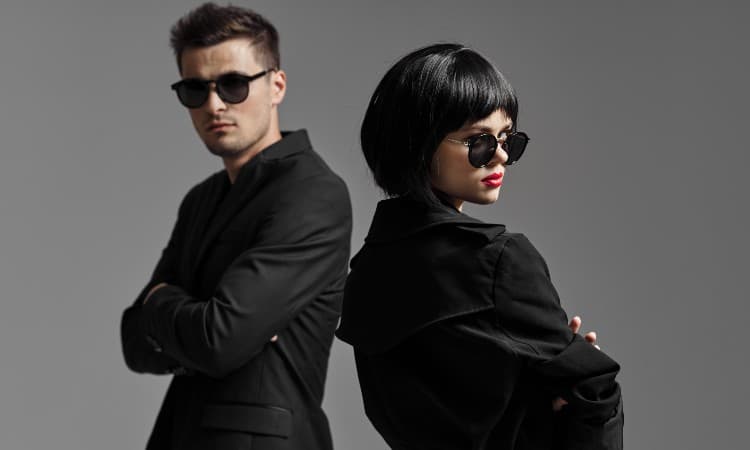 What Is Vantablack Fabric?

Vantablack fabric is a man-made substance developed for use by the military and the space industry. Designed by a British firm, Surrey NanoSystems, it is a material that absorbs 99.9% of all the light that hits it. This makes it the blackest black ever invented. But it’s not actually a color. Technically, it isn’t a fabric either.

It’s a coating that can be added to practically any surface. Like the outside of space rockets or the inside of telescopes. Any surface that requires protection from shocks or vibration is a good candidate for a vantablack coating. So too, is any surface that needs to eliminate the amount of light reaching it.

The coating sucks up so much light it makes everything look totally flat. Items are shapeless and have the appearance of the darkest black color you’ve ever seen. Or not seen because it’s not a color. Think of it as more of an optical illusion.

Vertically Aligned Nano Tube Arrays-black, or vantablack for short, is not a paint or a pigment. Nor is it any kind of dye. It’s formed rather than made. Grown in a laboratory, the coating is a series of tiny, densely packed carbon nanotubes that have no mass. Meaning the coating is mostly fresh air.

Because of this, the material is highly sensitive to touch. One stroke from a human hand can crush the little nanotubes, rendering them and the light absorption qualities useless. This is one of the reasons the substance is not available for use in clothing. Simply putting a garment on would destroy the nanotubes.

The process of making vantablack is complicated and involves chemicals and intense heat. Heavily patented, it’s a process that can only be used by the developers, Surrey NanoSystems.

What Is Vantablack Fabric Used For?

Even though vantablack is an awesome material, it has very limited uses. The best applications for the substance are ones that require light reduction and protection from shocks and vibration.

Infrared cameras, sensors, and the inside of telescopes are particularly suited to a vantablack coating. These items all work better in limited light.

The carbon nanotubes are incredibly resilient to shocks and vibrations. Making vantablack an excellent product for use on the outside of spacecraft. It protects rockets from the bumpy, jolting effects of leaving and re-entering Earth’s atmosphere.

Satellites and science equipment are what the product was designed for. In fact, at the current time, the substance can only be used for astronomical and scientific purposes. No commercial use has been approved. Vantablack cannot be purchased by companies, designers, artists, or the general public.

The types of clothes you could make with vantablack are endless. Shirts, dresses, jackets, morphsuits, hoodies, they would all look simply fantastic. Even the coolest black-out curtains would look impressive.

Just imagine how cool a morphsuit would look in the blackest of all black fabrics. There is a very good reason why morphsuits are made out of spandex. You need to be able to move in it. Movement in all garments is pretty important for humans. It’s not so great for the nanotubes.

Unfortunately, as soon as you lift the garment to put it on or hang the curtains to frame your window, you’d crush the tiny little nanotubes that make up the material. They would fall off the surface of the item they were grown on. Leaving a drab, colorless, and boring fabric.

Surrey NanoSystems may be looking into the potential for developing vantablack technology for the clothing industry. At the current time, a vantablack morphsuit is an impossible and expensive pipedream.

Vantablack clothing in any form is not possible. Any clothing advertised as vantablack is more likely to be one of the substitutes or alternatives we’ll be looking at later in the article.

Can You Buy Vantablack Clothes?

At the moment, making clothing out of vantablack fabric is neither economical nor possible. There are a couple of reasons why it’s likely to be a long time before this fabric is a clothing staple.

The first reason, although the fabric is strong enough to endure trips out to space on the surface of a rocket, can’t survive the weight of a human hand. Micro nanotubes making up the smooth surface of the fabric can be damaged beyond repair by even the lightest touch.

They are so small and tiny, the slightest pressure will cause them to collapse. That could make your exquisite, totally black gown look a little deflated. Ruining the overall effect of the fabric. The delicate nature of the nanotubes makes this an unsuitable fabric for clothing.

Another reason is the owners of the vantablack technology and who they allow to use it. Vantablack was developed by a British company called Surrey NanoSystems. Although they have been approached by watchmakers, carmakers, designers, and artists, they have given the exclusive right to use vantablack to just one person. A sculptor called Sir Anish Kapoor.

Specializing in conceptual and visual arts, Kapoor has prevented vantablack from being used commercially. It is not available for purchase by any other company or designer. With only Kapoor able to use the fabric, the price tag for both the material and items made from it remains high. Much too high for most people to afford.

Nanotechnology is still a relatively new science. As vantablack is nanotube-based, there is some confusion over whether it is harmful to humans. A study carried out in the UK back in 2008 found the tiny little nanotubes used in vantablack could cause harm to mice.

The vantablack they tested was the type used to coat items designed for use in space and optical instruments. Not expected to come into contact with humans, the slight risk of harm from the substance was thought to be too small to be a worry.

There is another form of vantablack. It’s called vantablack S-Vis. A slightly different coating is expected to be used in areas where the chances of human contact are high. The jury is still out on whether this second kind of vantablack is as toxic as the space-based option.

The truth is, the chemicals involved in the production of both vantablack substances could cause irritation to the skin. They could also be responsible for lung and eye problems.

Looking at too much vantablack fabric for too long could cause a similar condition to snow-blindness. Sensory deprivation symptoms may be short-lived, but no one really knows for sure the level of damage that could be caused to retinas or the optic nerve.

How Much Does Vantablack Cost?

Vantablack fabric isn’t made in the same way as most fabrics through weaving or knitting. It’s not material as such, it’s more of a coating made up of micro nanotubes. These nanotubes and the technology behind them belong to Surrey NanoSystems. They can only be grown in Surrey NanoSystems’ laboratories.

Processing the coating is complicated and involves different substances and intense heat. Applying the nanotubes to a surface can take days. The lengthy process of making and utilizing vantablack makes the substance expensive.

However, as the material is not readily available for commercial use, it’s hard to put an exact cost to it. Estimates from Surrey NanoSystems have indicated the price per ounce could be far higher than either diamonds or gold.

What Are Some Vantablack Alternatives?

These are two coatings designed by Surrey NanoSystems with artists in mind. Not harmful to health and a lot easier to apply, they can be used by anyone after approval by the company.

Each version is slightly different. VBx1 can only be used on products that are compatible with a vacuum process of application. VBx2 is applied by specialist painting contractors with a spray gun. Both versions require the artwork to be sent to Surrey NanoSystems for the coating to be added.

Unlike Vantablack, this product is paint. It can absorb about 98% of light so is less dark than vantablack. Although the difference is minuscule to a human eye. Less expensive and easier to produce, this product is available for anyone to use. Well, almost everyone.

Developed by Stuart Semple as an affordable alternative to vantablack, the one person in the world not allowed to purchase Black 3.0 is, Sir Anish Kapoor. It was his exclusive deal with Surrey NanoSystems that encouraged Semple to come up with Black 3.0.

Easy to apply with a paintbrush, this option is cost-effective for both artists and fashion designers. Making this the product most likely to be used in clothing.

Another paintable coating designed by a company called Nextel, this product can be used to make a matt surface with the texture of suede. It has a non-glare surface reminiscent of vantablack.

However, this product doesn’t have the same light-absorbing qualities. It’s mainly used on switchboards, optical instruments, and surfaces.

Nanotechnology is still in the early stages. It’s unlikely vantablack will be in retail stores anytime soon. In the meantime, try the vantablack alternative, Black 3.0 in your projects. You’ll get a similar result for less cost and hassle.

Let me know in the comments if you liked the article. Have you seen any vantablack sculptors or art installations? Are you going to give Black 3.0 a try in your next project?