According to the Oxford English Dictionary, the correct term for anyone who engages in needlework is “sewer”. Some modern writers have also started using the catchy, new term “sewist”, which combines the words “artist” and “sewer”.

There are plenty of sewing terms to choose from. Every kind of sewing has a name: you could be a quilter, an upholsterer, or an embroiderer. If you sew professionally, you probably call yourself a seamstress, a tailor, or a couturier. However, if you’re not a professional and you don’t want to pin yourself down to just one kind of hobby sewing, what term should you use to describe your hobby? 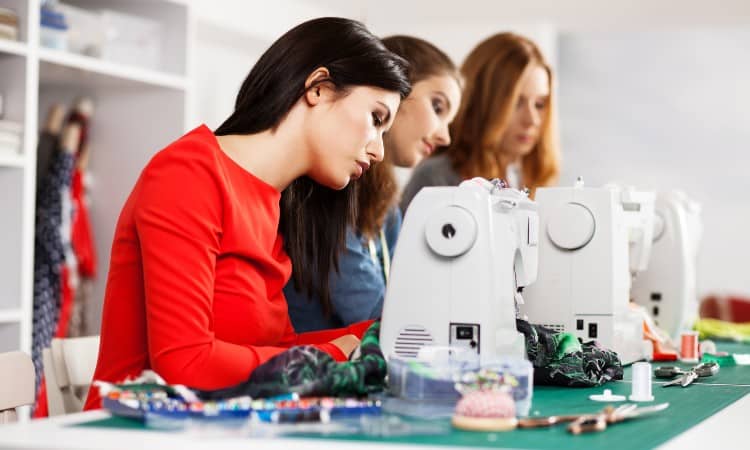 What Do You Call a Person Who Sews?

Sewer (pronounced SOH-er) is the historic, widely recognized term that many needleworkers still use. The word “sew” has its roots in Latin, but the specific term “sewer” first emerged in medieval poetry. It became more widely used about 600 years ago, and quickly gained such popularity that Samuel Johnson listed “sewer” as a word to describe a person who uses a needle in the first English dictionary, published in 1755.  Today, published sewing guides often use phrases like “the home sewer” to describe a person who sews non professionally.

Not everyone likes the term sewer, though. Some modern writers include a hyphen, spelling the term as “sew-er” to avoid confusion with the waste-pipe kind of sewer. (Generally, it’s pretty easy to tell what kind of sewer you’re talking about based on context; still, it’s easy to see why people who sew wouldn’t want to be confused with a smelly drain pipe!). Some people who sew argue that sewer is an old-fashioned term and that all confusion can be avoided by using a brand-new term instead.

Sewist isn’t recognized in any major dictionaries or sewing books yet. Plenty of bloggers and crafters use this new term, though, arguing that language is always evolving, and it’s time to embrace a new, easily understood term for anyone who does any kind of sewing. Considering one who duels is a duelist, so by extension, one who sews, is a sewist. The great thing about calling yourself a sewist is that no one will think you are talking about drainpipes.

Possibly the best thing about this new term is that it marries the idea of sewing with the elevated idea of art. This is great because sewing is art -you are creating something unique and intentional, whether you are using a pre-made pattern to cut out and sew your first handmade garment, crafting a toy for your child, or designing an intricate quilt. Sewing takes skill, time, and patience. People who embrace this art deserve a fancy new term like sewist!

The downside is that this term is so cutting-edge that even the Scrabble dictionary doesn’t consider it a real word. You might get some confused looks from your friends if you introduce the term in a conversation. Your spellcheck won’t like it, either.

If you sew professionally, you probably refer to yourself with a more specific term than either sewer or sewist. Seamstress is a catch-all term for a woman who sews professionally. Before the mass-production of sewing machines in the Industrial Revolution, many women earned money by hand-sewing in their homes. The term seamstress also referred to women who sewed for professional shops.

These days most professionals refer to themselves with an even more specific term, though. For example, a person who sells handmade dresses on Etsy likely refers to themselves as a dressmaker. Seamstress is a bit vague for someone who wants to market a particular sewing skill.

This one has fallen out of favor these days. Technically, “seamster” is the term for a man who sews professionally. It is one of those words that just dropped out of use, though, probably because of the common practice of referring to men who sew as tailors. Seamster does have a cool ring to it, though!

Tailor is another term for someone who sews professionally. Tailoring is the art of altering clothes. If you have ever needed to get a suit fitted before an important job interview, you probably visited a tailor. (If you have never tried altering a piece of clothing, you may not realize how difficult it is! Really good alterations require a lot of skill.). Some tailors also sew clothing, though, especially suits and coats. This is another fairly broad term that has evolved to encompass more than one particular skill.

A couturier is a fashion designer who makes and sells clothes for a client. Couturier is the French word for dressmaker, but these days it is usually used to describe high fashion. Coco Chanel was a famous couturier that pretty much everyone has heard of. People in the fashion industry today also call themselves fashion designers, or haute couture designers.

Okay, this term is pretty self-explanatory. If you design and/or sew dresses, you probably call yourself a dressmaker. This is a great term for both professional and hobby sewers! Historically, dressmaker was usually referring only to women who sewed dresses.  Of course, dressmaker is a specific term. If you sew stuffed animals, placemats, or Renaissance Faire kilts, this is not a term you would want to use to describe your hobby.

Other Commonly Used Titles for People Who Sew

Here are a few more terms that are sometimes used to describe people who sew. Some of them you probably see a lot, like quilter and textile artist. Others aren’t super popular yet, but the explosion of the crafting industry via online shops like Etsy may well give life to new terms for describing people who sew!

This is a term that doesn’t get used much today. It refers to a person who does the finishing work on a garment. In the age of mass-produced clothes, there aren’t many places that use hand stitching to finish garments, which is probably why we don’t see this term much anymore. Stitcher is a cool, generic term that may start to catch on in the sewing community, though! It’s so broad that it could cover everything from quilting to knitting if it was used to mean anyone who takes a stitch.

A quilter is someone who sews quilts! Quilting is one of the oldest forms of sewing and is practiced all over the world in a variety of forms. The cool thing about this term is that “quilter” can refer to people who hang out on a front porch with their moms, grandmas, and friends to quilt a project together, and it can just as easily refer to a professional textile artist who crafts and sells thousand-dollar quilts as works of art.

While you can certainly create fabric art as a hobby, the term fabric or fiber artist usually refers to someone who creates art through the medium of cloth and fiber. We’re talking museum-level art here, not a poodle appliqued onto a skirt. Fabric art is a pretty broad field; some fabric artists even use cloth and fabric to create the illustrations in children’s picture books!

This is another term for someone who uses fabrics and fibers to create art. Some weavers also refer to themselves as textile artists.

You may like the exuberance of this term, especially if you like to sew as a hobby. Most crafters are passionate about their needlework, so calling yourself a sewing enthusiast might be the way to go! Of course, if you love a specific kind of sewing, you may find this term too vague. If you want to sell and market your work, you probably find this term too amateurish.

Needleworker is not a dictionary-recognized word, but it is a broad term that covers everything from quilting to knitting. Anyone who wields a needle could easily embrace this term.

You don’t see this term a lot, but it describes a person who makes and sells clothes that are individually fitted to a specific client. High-end tailors and dressmakers are customer clothiers. Most of us buy clothes off the rack today, but if you are lucky enough to buy bespoke clothing, you get your clothes from a customer clothier.

This is another term that doesn’t get a lot of use. If you Google “garment maker” your top hits will be a company or person that makes clothes or one who works for a company that makes clothes. This term isn’t used to describe a person who sews these days.  On the other hand, if you sew clothes, this is a nice, all-encompassing term that covers everything from dresses to socks.

Next time you talk to your friends about your sewing hobby, what will you call yourself? Do you like the classic term sewer, the catchy sewist, or a more specific term, like dressmaker?

After reading about the history of these terms, I’ve decided I want to be part of the language-evolution wave and refer to myself as a sewist!

What is your choice? Leave a comment below to let me know!

I do prefer the name " Sewist " This name is definitely more elegant.