Many people today are trying to move away from using toxic cleaners such as bleach. They are using hydrogen peroxide instead for basic household cleaning. It is milder than bleach but has similar properties. Due to this, you may wonder, “Does hydrogen peroxide bleach clothes?”

It turns out that hydrogen peroxide is safe to use on most dyes and fabrics, as long as the dye is colorfast. It’s mild bleaching properties work well for making whites whiter and colors brighter. This makes it an effective substitute for chlorine bleach. 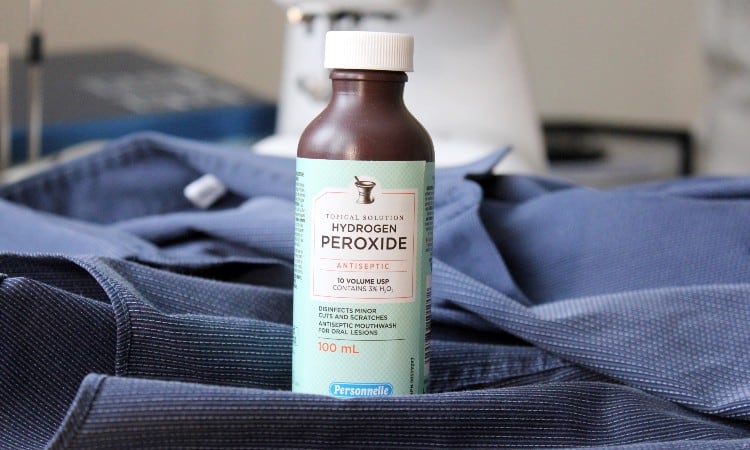 Can You Use Hydrogen Peroxide in Laundry?

How Do You Use Hydrogen Peroxide in Laundry?

If you don’t have a bleach dispenser, make a hydrogen peroxide solution by mixing 2 cups of water with 1 cup of hydrogen peroxide. Pour it directly into the washing machine before adding your clothes or add it after the washer has filled with water.

How Much Hydrogen Peroxide Should You Put in Laundry?

You should only use about one cup of hydrogen peroxide per load of laundry. One cup is plenty to whiten your white clothes and brighten your colored clothes.

As mentioned above, either add it to the bleach dispenser or mix it with water before running a load of laundry. Using too much hydrogen peroxide without mixing it with water could leave stains on your clothes.

Before using hydrogen peroxide on colored clothes, check them for colorfastness. Dark colors like red or navy blue tend to fade or bleed. Watch the short video below to learn how to perform a colorfast test.

Precautions You Should Take When Using Peroxide in Laundry

There are some other popular cleaners that should never be mixed with hydrogen peroxide. Doing so could be hazardous to your health. Let’s look at each of the chemicals and why you shouldn’t mix them.

Vinegar is a popular laundry additive due to its ability to remove odors from clothes and prevent dyes from bleeding. You should never mix hydrogen peroxide in a container with vinegar or add them both to the same load of laundry. Mixing them makes peracetic acid, an eye and skin irritant.

You shouldn’t mix bleach and hydrogen peroxide in a container either. It will create a highly flammable oxygen gas, which could cause an explosion.

Some people use ammonia as a pre-laundry stain remover. Ammonia is a skin and eye irritant in itself. Mixing it with any type of bleach, chlorine or non-chlorine, can be even more dangerous.

Since hydrogen peroxide is a non-chlorine bleach, you should never mix it with ammonia. Doing so will produce a toxic gas that can cause coughing, difficulty breathing, chest pain, and even pneumonia.

How to Clean Yellow Hydrogen Peroxide Stains on Clothing

To effectively remove the stain, you will first need to dilute it by dipping the whole clothing item into a bucket of water.

You have two options here. You can use either white vinegar or commercial bleach to remove the stain.

Note that using vinegar or bleach to blot the stain will not be dangerous as the peroxide is already dry and nonreactive. However, you should pick one or the other. Mixing vinegar and bleach produces chlorine gas which can cause breathing problems.

How Do You Use Hydrogen Peroxide to Remove Stains?

Before learning how to remove stains with hydrogen peroxide, we should note that hydrogen peroxide is light sensitive. It becomes inactive when exposed to light, which is why it comes in a brown bottle.

This can be done by attaching a spray nozzle to the bottle of hydrogen peroxide. You can then spray it directly on the stain. You can also pour a small amount directly onto the stain, but it’s easy to use more than you intended to by doing it that way. Alternatively, use a cotton swab to dip and apply the peroxide to the stain.

The hydrogen peroxide should soak into the stain and fabric for around 10 minutes.

Wash the stained clothing as you normally would. This will remove the rest of the stain and the hydrogen peroxide residue.

Even though hydrogen peroxide is an effective whitener and stain remover, some people still prefer to use chlorine bleach. Is one better than the other? Let’s look at the advantages and disadvantages of each.

The hydrogen peroxide sold in stores is not only an effective laundry cleaner, it is also an effective general household cleaner. It can be used for many things that bleach can’t because it leaves no residue behind. That’s one of the many reasons that some households prefer it as an alternative to chlorine bleach.

Hydrogen peroxide is also safer than chlorine bleach. It doesn’t produce fumes, and you don’t need to wear gloves and protect your clothes and skin when using it.

Some people use hydrogen peroxide in the dishwasher as a way to disinfect dishes. Other people use it to clean heavy use surfaces, such as refrigerators, keyboards, phones, and countertops.

The downside to using hydrogen peroxide is that it doesn’t work immediately. Yes, it will kill bacteria and viruses, but you can’t just spray it and wipe it off. Peroxide needs time to sit in order to be an effective germ-killer, whitener, and stain remover.

We all know of the cleaning abilities that chlorine bleach has. It is highly effective at killing both bacteria and viruses. Unlike peroxide, it begins killing germs immediately.

Those properties make bleach a common additive to toilet, laundry, and kitchen cleaners. It can also be used as-is out of the bottle.

There are many disadvantages to using bleach, though. Bleach leaves behind a residue on anything that you use it on. The residue can transfer onto your skin and clothes, causing pain and skin irritation, and even damage clothes.

Bleach also produces chlorine gas. The fumes from chlorine gas are dangerous, especially for people with asthma or other respiratory illnesses. It can actually make symptoms worse if inhaled.

Like hydrogen peroxide, you should not mix bleach with ammonia, vinegar, and other cleaners. When mixed, the chlorine gas is even more dangerous. It can cause eye and nose irritation, breathing difficulties, and can even be deadly.

Whether you choose to use hydrogen peroxide or bleach, follow the cleaning instructions carefully. Do not mix them with other cleaning agents. You should only use them for their intended purpose: cleaning and disinfecting.

We hope that any questions you may have had about using hydrogen peroxide in your laundry were answered. If used properly, hydrogen peroxide is a very effective alternative to chlorine bleach. It is also safer. Its ability to whiten, remove stains, and disinfect make it a great all-purpose laundry cleaner.

Did you enjoy this article? Have you tried using hydrogen peroxide in your laundry before? Tell us your experience and opinion in the comments. If you enjoyed the article, don’t forget to share it with your friends and family.

I have used peroxide for years in the laundry, kitchen and bathrooms. I mix Dawn dishwashing with it and put in a spray bottle. Let it sit while I spray whatever else needs it. Everything almost sparkles. And I don't feel bad like I do after using bleach. Bad as in; eyes and nose running etc. Great article!