Crew neck and v-neck shirts are both classic style staples for both men and women. But certain differences between the two may make one the better choice for certain occasions. What is the difference between a crew neck and a v-neck?

Both sweaters and t-shirts come in crew neck and v-neck styles. Neither style of shirt has a distinctive collar and the overall fit is the same as well. The main difference between the two is that crew necks fit closer to the neck than v-necks do.

It may seem like an insignificant difference, but the neckline of the shirt or sweater can play a role in how the shirt is worn or what occasion it is appropriate for. In this guide, I will explain the difference between a crew neck vs. a v-neck so that you’ll know how and when to wear each one. 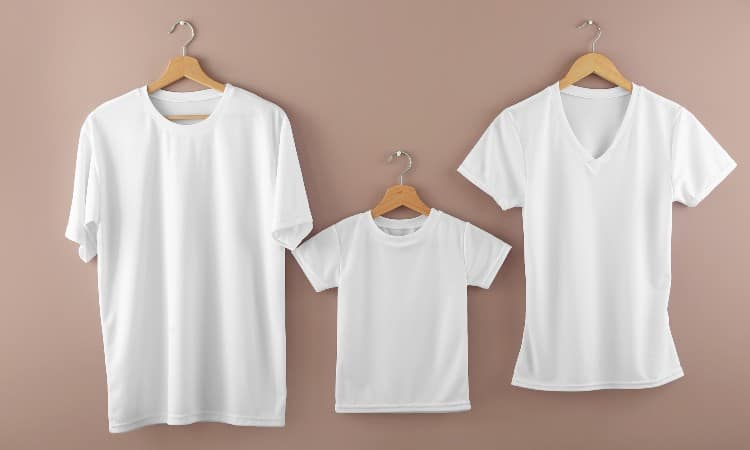 This chart will provide you with a brief overview of the similarities and differences between a crew neck and a v-neck.

What Is a Crew Neck? 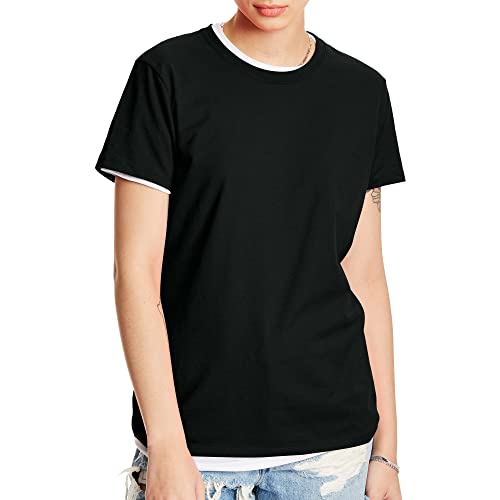 A crew neck is a shirt that has a round but collarless neckline. Crew necks are one of the oldest styles of t-shirts and have been around since the 1800s, but the shirt has since evolved to include crew neck sweaters in addition to t-shirts. Whether the crew neck is a shirt or a sweater, it can be worn by itself or as a layer over or under other clothing.

Crew necks got their name because it was the style of shirt worn by sailors and rowers or the “crew” of a boat. Crew neck t-shirts were worn by other laborers- such as miners and farmers- primarily male. They wore them because they were easy to clean and kept them cool while they worked.

Over time, crew neck t-shirts were adopted by the U.S. Navy and American football programs to be worn under their respective uniforms. Again, this is because they helped to keep them cool and comfortable and were easy to clean, in addition to being inexpensive to buy in bulk.

As the shirts became more widely worn, they became more acceptable for everyday wear. Retailers started selling plain, white t-shirts. Popularity grew, and the crew neck t-shirt evolved into being sold in more colors and a style of sweater. Both men and women now wear crew neck shirts and sweaters.

What Is A V-Neck? 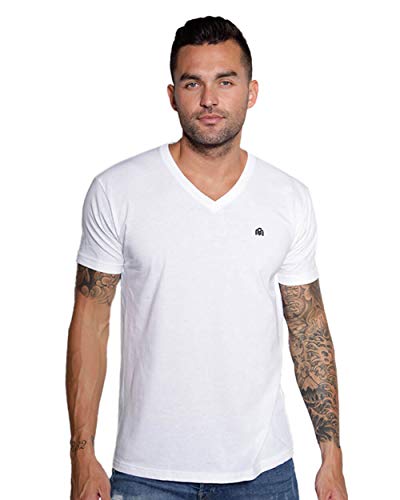 A v-neck is a shirt or sweater that has a v-shaped neckline and no collar. V-necks started as a style of t-shirt, although it hasn’t been around for nearly as long as a crew neck t-shirt. But once v-neck t-shirts were created, they quickly grew in popularity.

V-neck t-shirts have only been around since the 1960s and were designed to reinvent the standard crew neck style of shirt. World War II and the Korean War in the decades prior had created a textile shortage, so new types of clothing couldn’t be produced.

But after the war, there was more funding available to create new versions and styles of clothing. The v-neck was one of these new styles, favored by male “modernists” because of the sculpted appearance that it gave to the wearer.

Just like crew necks, v-necks have since expanded to include t-shirts for both men and women. V-neck t-shirts aren’t as popular to wear as undershirts, but they can be worn by themselves. In addition to t-shirts, v-neck sweaters are a popular clothing choice as well.

What’s the Difference Between Crew Neck and V-Neck? 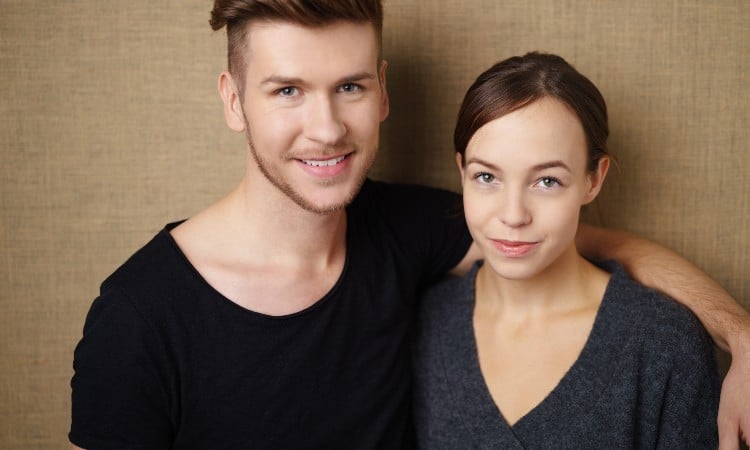 The style is the most noticeable difference between crew and v-necks. Neither style has a collar, but crewnecks have a rounded neckline while v-necks have a v-shaped neckline.

Both sweaters and t-shirts now come in crew neck and v-neck styles. For t-shirts, either style is casual and can be worn as an undershirt, although crew necks are more popular for this purpose.

For sweaters, crew necks are more casual for men. V-necks can be either casual or professional. They are professional when worn over a collared shirt with a tie because the cut neckline leaves room for a tie to be seen. 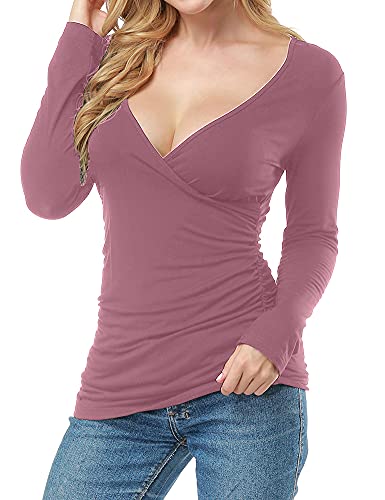 The fit of crew necks and v-necks aren’t that different from each other, but they do come in fits for both men’s and women’s styles. Men’s shirts tend to have more straight or relaxed fit, while women’s shirts can be either relaxed or more fitted.

Traditional crew neck t-shirts all had a relaxed fit, which is one reason for their popularity. The shirts were comfortable to wear and weren’t tight-fitting. But now, it is recommended that a crew neck shirt fit more tightly if it is going to be worn as an undershirt. Crew neck tees and sweaters worn by themselves or over other clothing should still have a loose and more relaxed fit.

V-neck shirts can also have a relaxed fit or fit more tightly, although a tighter-fitting shirt is common for men because it sculpts the person wearing it. However, the fit you should go with really depends on how you’re wearing the shirt. For example, it is recommended that v-neck sweaters that are worn over clothing fit more tightly instead of being baggy. But they shouldn’t fit so tightly that it makes them uncomfortable to wear.

V-necks are a more modern style of t-shirt, having only been around since the 1960s. They’ve never really been associated with laborers and have always been considered the more fashionable choice for a neckline. But they are now worn for many occasions and are favored by people who prefer a more modern style.

There’s not necessarily a right or wrong time to wear a crew neck or a v-neck. But you should consider the type of shirt you’re wearing. For example, crew and v-neck t-shirts are better to wear by themselves during the spring and summer, but in fall and winter, they can be worn underneath sweaters.

For men, crew neck and v-neck t-shirts can be worn by themselves or under collared shirts or sweaters. For women, both t-shirts are usually worn by themselves, but they can be worn under a sweater to create an extra layer. T-shirts can be dressed up or down for both men and women, but they may not be acceptable work attire for certain professions.

Sweaters may be more acceptable work attire, especially during the colder months. For men, a crew neck sweater is considered to be more casual. V-neck sweaters are more appropriate if they are worn over a collared shirt and with a tie.

For women, the opposite is true. Women’s v-neck sweaters are usually worn more casually. Crew neck sweaters can often be worn in the office, especially when pairing them with dress pants.

Pros and Cons of Crew Neck 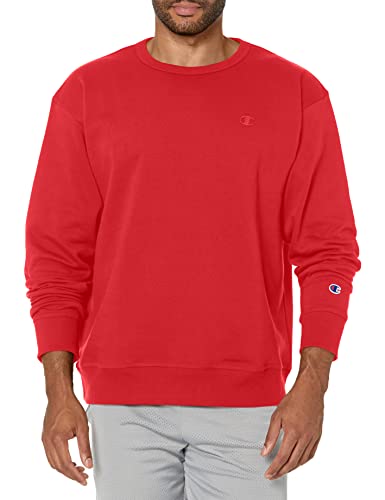 Now that we know the characteristics of crew necks let’s review some of the pros and cons. Crew neck t-shirts and sweaters are considered to be casual for men. That could be both a pro and a con, depending on how you want to wear it.

Crew neck t-shirts can be worn by themselves or as a layer. They are very versatile, so that’s definitely a pro. They tend to have a relaxed fit and are more of an everyday garment, especially crew-neck t-shirts.

There aren’t very many cons to crew necks. The cons mostly apply to men’s styles. Because crew necks are considered to be more casual, they may not be appropriate for all settings. They also can’t be worn with a tie the way that v-necks can.

Pros and Cons of V-Neck 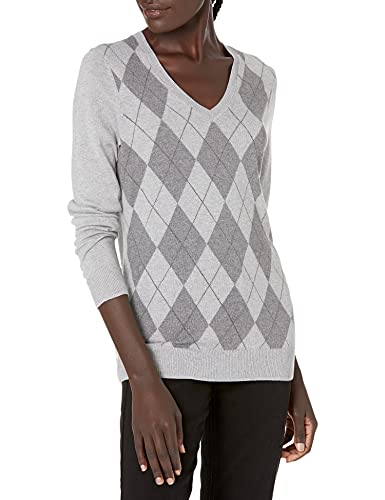 V-necks have their pros and cons as well. V-neck t-shirts are considered to be casual for both men and women. But again, that may not be a definite pro or con, just depending on how you want a particular garment.

Is V-Neck or Crew Neck Better?

As you can see, the major difference between the two is the shape of the neckline. Neither one is necessarily better than the other. It just depends on what you’re looking for. You can’t go wrong with either a crew or v-neck t-shirt. It’s more of a personal style preference.

When deciding between a crew or a v-neck sweater, you should consider how you want to wear it. If you’re a man who wants an everyday sweater, then a crew neck would be the way to go. But if you need a sweater that you can wear to work and your workplace requires a collared shirt and tie, then a v-neck sweater is the better choice.

For women, both crew and v-neck sweaters can be worn casually as an everyday look. But if you want to purchase a sweater that looks more professional, you will probably want to go with a crew neck sweater. 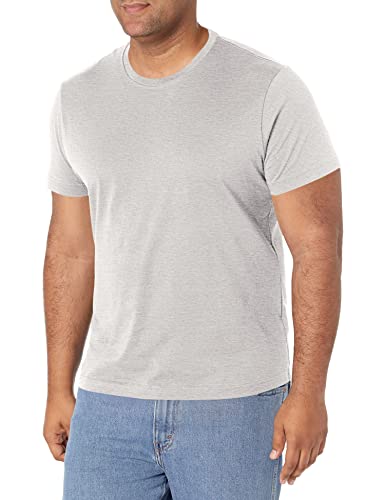 This men’s crew neck t-shirt can be purchased in 44 different colors, either with or without a pocket. It’s perfect to wear alone or underneath another shirt or sweater as a layer. It comes in 12 different sizes, including tall sizes.

This shirt is made from 100% cotton, so it will be very comfortable and breathable to wear.

It’s easy to care for because it can be washed in the washing machine. It’s also affordable, so you can purchase it in multiple colors if you like. 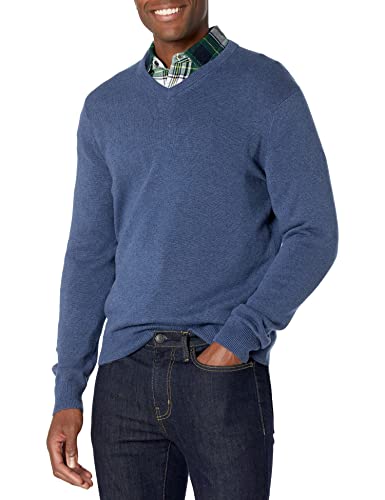 This v-neck sweater comes in 43 different colors and patterns as well as six sizes. It also features a ribbed hem and cuffs so that it fits snugly where you need it to.

This sweater can be worn over a t-shirt for a casual look or over a collared shirt with a tie for a more professional look.

It is made from 100% cotton, so it is also very easy to care for. When worn as a layer over another shirt, the sweater will keep you warm as well. You can layer it even more by wearing a jacket over it. 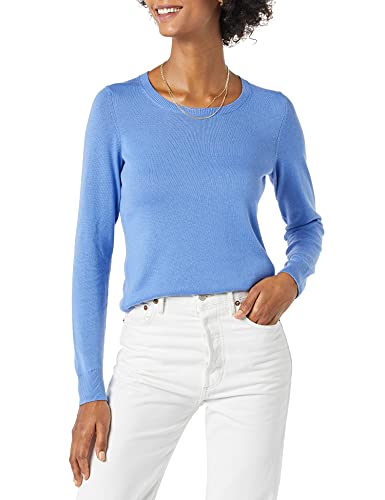 This women’s crew neck sweater comes in 35 colors, from neutrals to brights and even stripes. It comes in 11 different sizes, even slim sizes, if you need a more snug fit.

The sweater can be worn casually, but it is also appropriate for the workplace.

Made from a blend of cotton, modal, and polyester, it is made from a soft yarn, so it is comfortable. Being made partially of polyester also means that it is durable. This sweater is easy to care for and can be washed in the washing machine. 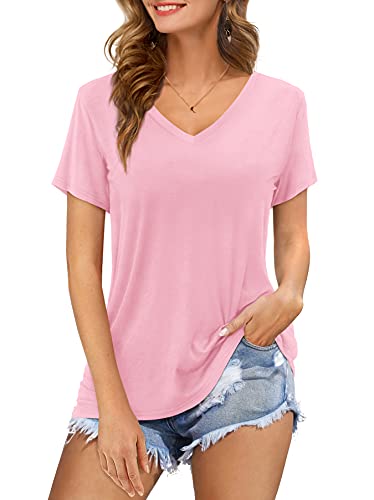 This v-neck tee has a feminine cut while still having a relaxed fit. You can choose either a long-sleeved or short-sleeved tee in 24 colors and five sizes.

It’s perfect for wearing casually, running errands, or just lounging around the house.

The shirt is made from a blend of rayon and spandex. It is breathable and comfortable while having a little bit of stretch to it as well.

It is also machine-washable, so caring for it is easy.

I hope this article provided you with plenty of helpful information about the difference between a crew neck and v-neck shirts. Other than the shape of the neckline, the two aren’t that different. The main thing to remember is that there may be different style suggestions for mens’ vs. womens’ tees and sweaters. If you enjoyed this article, share it with others and leave a comment. Thanks for reading!